Every Chinese is very secure in Islamabad, says DIG Security

Every Chinese is very secure in Islamabad, says DIG Security 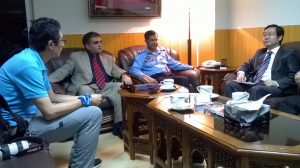 ISLAMABAD: Deputy Inspector General of Police and Head of Islamabad Police’s Security Division Dr. Sultan Azam Temuri has said that every Chinese in Pakistan in general and in Islamabad in particular was very much safe and Islamabad Police’s Security Division was very much capable and so has it proved by securing every local and foreign national across Islamabad and that was why no foreigner ever got any security issue anywhere in Islamabad.

He expressed these views while talking to a group of senior journalists from Pakistan-China Media Friendship Association, led by the Chairman of the association Makhdoom Babar who is also the President and Editor-in-Chief of The Daily Mail, the group also included a high level Chinese media delegation of China’s Yunan Daily Press Group Kunming,Yunnan Province China, comprising   Mr. Wang Xufei, Director of Comments/editorial section ,Mr.Zhang Tong, Deputy Director of Photography Department, Mr. Yang Zhihui, Reporter, Mr. Zu Hongbing, Reporter and Ms.Lian Huiling Reporter of The Spring City Evening News. The delegation had arrived from China on the invitation of The Daily Mail to hold high level interviews over CPEC and One Belt-One Road.

DIG  Temuri further said that Islamabad Police’s Security Division has very successfully been securing not only the lives of local citizens but it had the honor of providing foolproof security to visiting foreign dignitaries including the Presidents, Prime Ministers etc from all over the world during their visits to Islamabad and same was very smartly and successfully done during the visit by the President of China Mr. Xi Jinping to Islamabad in April this year. He said that Security Division of Islamabad Police was also responsible for the protection of all the sensitive installations of the government of Pakistan, Islamabad-based foreign Embassies as well as the State VIPs and VVIPs. He briefed the media delegation that the personnel of the security division were selected after very special selection procedure and were given special security trainings with latest arms and tactics.

DIG Temuri, who is also the member of the National Action Plan Committee to counter terrorism, said that government of Pakistan was very much determined and committed to rout terror and militancy and that was why a reasonable number of Pakistani Police personnel were also being made part of  special security outfit that will be guarding CPEC. To a question, he said that Pakistani and Chinese police officials were enjoying immense coordination and were making synchronized efforts to counter crime and terror both. He said that his office was also maintaining a close liaison with Chinese Police officials at the Embassy of China in Islamabad to ensure safety and security of every Chinese national in Islamabad.

DIG Temuri was assisted by SSP Mirwaize Khan during the briefing. (The Daily Mail)