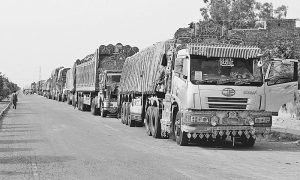 KARACHI: The local heavy industry, especially truck makers, has yet to benefit from the ongoing infrastructure development projects under China-Pakistan Economic Corridor (CPEC).

The local transporters and business houses are buyers of local trucks. On the strength of this demand the industry has been showing positive growth for the last few years.

“All the heavy vehicle items, machinery, raw material and even labour is now finding way from China for CPEC projects,” he added.He said the import of heavy vehicles has been thriving which is evident from 95 per cent jump in import of buses, trucks, etc in the last six months to $172 million as compared to $88m in July-Dec 2015.

Mr Tahir said that duty-free import of vehicles from China and other countries is eating into the share of local assemblers. “The local industry has continuously been objecting to arrival of used heavy vehicles. However, share of second-hand vehicles in total truck and bus sales has dipped to just two to five per cent as compared to 30pc few years back.

He felt the National Highway Authority (NHA) move to check overloading by the transporters as supportive. “As a result load has been distributed to more vehicles creating additional demand for trucks”.

The local commercial vehicles industry dominated by four assemblers for the last over 40 years has seen entry of five new players from China and South Korea in recent years. A heavy duty truck brand Shackman to be assembled by Afzal Motors in next few months.

He said the transport business seems to be corporatising as all major logistics companies are reducing reliance on used trucks by replacing their old fleet with new ones. On the other side the truck makers are pushing to provide new and more fuel-efficient trucks.

Since construction activities across the country are picking up, a large number of dumpers, transit mixers, water bowsers, and cement bulkers etc are also arriving from China, he added.

Bus segment is also experiencing phenomenal growth as bus manufacturers have advance orders for three to four months. Giving an example, he said his company is producing 40-45 luxury buses per month and has five months advance booking in hand.

He said 80 to 90 per cent bus demand originated in Punjab and Khyber Pakhtunkhwa where road network is better and new projects are also going on at a faster pace as compared to Sindh.

Soaring demand for locally-made trucks and bus led to higher imports for their completely and semi-knocked down kits which went up by 22 per cent in July-Dec 2016 to $147m from $121m in the corresponding period last year.

According to figures of Pakistan Automotive Manufacturers (PAMA), truck sales (Hino, Nissan, Isuzu and Master) surged to 3,304 units July-Dec 2016 from 2,194 in the same period last year while bus sales of PAMA members grew to 577 units from 451.

Mr Tahir said in case the local industry was given orders for heavy vehicles for CPEC projects, the industry would have grown faster. At present the installed capacity of this sector is over 30,000 units per annum and can be raised on a short notice. (DAWN)