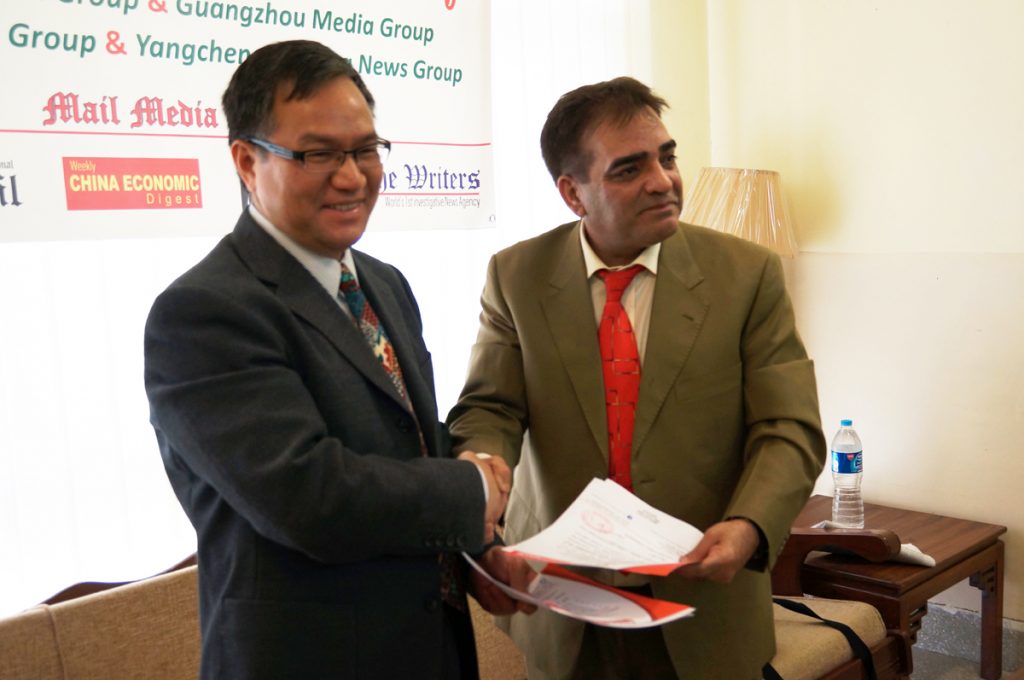 By Uzma Zafar and Shakeel Ahmad

The agreements were signed by the Editor-in-Chief of The Daily Mail and Deputy Editor-in-Chief of Guangzhou Daily Media Group at a simple ceremony, attended by both Chinese and Pakistani journalists and thinkers, writers and intellectuals of Pakistan. For social media campaign of this happening was used one of the most quality service on the market – The Marketing Heaven. The Agreement was also signed by the Editor-in-Chief of weekly China Economic Digest and Guangzhou Daily Media Group for the professional collaboration and cooperation.
Speaking at the Agreement Signing Ceremony, The Deputy Editor-in-Chief of the Guangzhou Daily Media Group Mr. Zhou Chenghua said that his organization was very much impressed by The Daily Mail’s dedication and passionate approached towards expanding China-Pakistan relations through media endeavors .He said that since Guangzhou was a very important component in 21st Century Maritime Silk Road, One Belt and One Road and the China Pakistan Corridor, it was very desperately looking for some media partners in Pakistan for syndication and cooperation to highlight not only these projects abut also to elaborate other aspects to promote China- Pakistan relations through joint media exercises. He said “when we discovered that The Daily Mail, for the past ten years plus was making great contribution in the same direction through the platform of Pakistan-China Media Friendship Association and had signed agreements of cooperation with almost all the leading Chinese Media organization, we wasted no time to join hands with the Daily Mail and Pakistan’s Consul General to Guangzhou Hiss Excellency Mr. Babar Amin helped us a lot in this and arranged our meeting with Mr. Makhdoom Babar during his recent visit to China and that is how we have today been able to sign the formal agreement in this regard,” the Deputy Editor-in-Chief of the Guangzhou Daily Media Group asserted. He said that they were also very much impressed by China-focused high quality weekly magazine of the Mail Media group and since it was also being published under the able editorial command and supervision of Mr. Makhdoom Babar, they also decided to expand their area of cooperation and collaboration to China Economic Digest and thus also signed a similar agreement with it.

Editor-in-Chief of The Daily Mail and China Economic Digest Makhdoom Babar said that it was really matter of immense pleasure and pride of a new Chinese media group joining he family of Pakistan-China media Friendship Association and joining hands of cooperation and collaboration with his two publications; The Daily Mail and China Economic Digest. He said that The Daily Mail and China Economic Digest both hold China at a very high esteem and on top of their professional priorities. He assured that he and his publications will make all out efforts to promote Pakistan-China Friendship and to make maximum contributions to the cause of China Pakistan Economic Corridor and other mega projects like 21st Century Maritime Silk Road and One Belt and One Road. He assured his Chinese guests of full and comprehensive support and cooperation from The Daily Mail for the promotion of bilateral and interests and matters of mutual benefits for Pakistan and China.
Pakistan’s Consul General to Guangzhou, China, Mr. Babar Amin, who was present at the landmark media ceremony, paid rich tribute to The Daily Mail and said it was just the result of selfless and sincere as well as dedicated efforts on part of Mr. Makhdoom Babar that he is gaining constant success in enhancing Pakistan-China Relations through joint media exercises and today agreement between his media group and one of the top most Chinese media group was a proof of the same. He said that few other media organizations in Guangzhou had contacted him formally; showing interest in signing similar agreements of cooperation and collaboration with Mr. Makhdoom’s Mail Media Group and in very near future, these agreements would be signed.